The Meat Paradox: How can people love animals, and yet eat them? 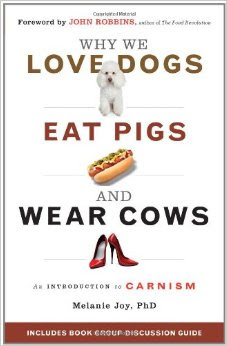 How can people care about animals, and yet eat them? This is the meat paradox.

According to ADAPTT (2016), the number of animals killed worldwide for the food industry reaches 150 billion each year. The animal rights organization PETA (2016) reported more than a billion animals killed for the leather industry and approximately 100 million in vivisection laboratories in just the U.S. 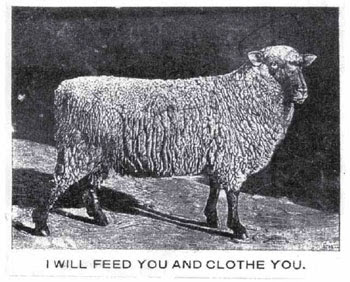 Interestingly, we observe a banalization of this massive exploitation: The average Belgian eats around 86 kg of meat a year (WRI, 2016) and Europe imports 33,000 tonnes of heavy leather obtained from bovine animals per year (FAO, 2014). These routines suggest that we live in a culture that does not value animals’ lives, ignores their suffering, and denies them moral standing (Bratanova, Loughnan & Bastian, 2011). However, according to the American Pet Association, ownership of pets around the world, and especially in the U.S., is increasing (APPA, 2016). How can society consider animals part of people’s families and yet tolerate their instrumentalization, deindividualization, dichotomization and objectification by eating, wearing or using them (Joy, 2010)? This is a paradox.

How do we manage the meat paradox?
The state of ambivalence emerging from the contradiction that people enjoy eating meat but do not like eating minds generates cognitive dissonance, which motivates individuals to resolve an unpleasant emotional state in which a belief and an action are in conflict (Festinger, 1957; Harmon-Jones & Harmon-Jones, 2007; Loughnan et al., 2011). In other words, how can people deal with a contradiction between a moral belief (e.g., I should not hurt animals) and a specific form of behaviour (e.g., I eat meat, I wear leather) (Bratanova et al., 2011).

One way to resolve this state of ambivalence is to stop the consumption of animal meat. Indeed, vegetarians and vegans do not experience discomfort with respect to the relationship between their consumption and the animal rights (Allen et al., 2000). However, the vast majority of people do not change their behaviour and keep eating meat. A way for them to reduce this dissonance is to modify their perception of eating animals, especially by denying that animals suffer and diminishing the moral rights of animals (Loughnan et al., 2011). Specifically, researchers asked their participants to eat beef jerky or cashew-nuts, and then indicate their moral concerns about animals (‘rate the extent to which you think a cow possesses the ability to experience these psychological states: perception, wishes, thoughts and intentions.’). As expected, participants who ate beef jerky attributed fewer abilities to the cow compared to the participants who ate cashew-nuts. Thus, they concluded that eating meat leads people to withdraw moral concern from animals (Loughnan et al., 2010). In the same vein, scholars have demonstrated that omnivores (but not vegetarians) offer evidence of a clear distinction between meat and non-meat animals by denying non-meat animals emotions and excluding their moral concern (Bilewicz et al., 2011). To summarize, withdrawing moral concern from animals can play a role in the way in which people perceive animals and motivate them to resolve the meat paradox (Loughnan et al., 2011). 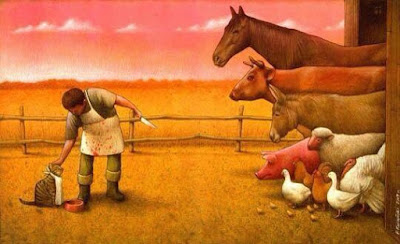 In conclusion, the animal meat industry slaughters a huge amount of animals each day (Monson, 2010), and the production and consumption of meat entail numerous negative consequences for our environment and our health (IARC [2015], the cancer agency of the World Health Organization, based on 800 studies on red meat and transformed meat). However, even if people assert that they love and respect animals, they keep on eating meat and instrumentalizing them. This paradox generates cognitive dissonance that can be resolved in many different ways: for example, by ceasing meat consumption like vegetarians. For omnivores, they tend to minimize the moral rights of animals in order to feel less guilty while eating them (Loughnan et al., 2010). Additionally, lobbyists from the meat industry might also play an important role in the meat paradox by spreading false information to encourage people to consume more meat or discourage them from adopting alternatives (e.g., ‘There is no science linking red meat to cancer, stroke and heart attacks,’ ‘Red meat warnings violate consumer rights,’ ‘Real men eat meat,’ ‘Millions of Americans can’t be wrong,’) and also exert pressure on and bankroll institutions, organizations, environmental groups, scholars, etc., in order to ensure that their business flourishes (Andersen & Kuhn, 2014). 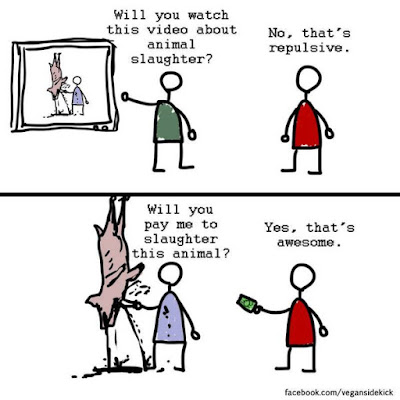 Finally, as we saw, this disconnect (e.g., between what we have on our plate and the animal killed) leads directly to negative impacts on health, environment and animal welfare. However, while I was writing this article, I was really surprised about how people did not know about the consequences that their daily habits generate (e.g., that their shoes came from pig skin or that the cosmetics they use had been tested on rabbits or monkeys). This ignorance inspired me to offer an alternative point of view on the animal industry, not to convince them to change, but to act freely while being aware of the consequences of their consumption.

And you, how do you manage the meat paradox?

1.      Documentaries:
Earthlings: Hidden cameras are used to record what the animal industry does not want us to see.
‘Cowspiracy’—The Sustainability Secret: Destructive consequences of the animal meat industry for the planet.

FAO (2014). Imports of heavy leather from bovine animals—Food and Agriculture Organization of the United Nations. Retrieved 7.7.2016, from http://www.fao.org/3/a-i4651e.pdf