Men have it bigger: gender differences in social networks 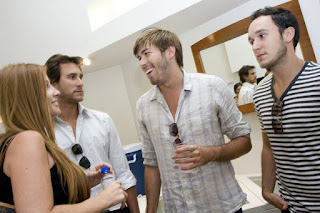 Have you ever wondered why men and women seem to differ in the way they socialise? According to Baumeister and Sommer, men and women are equally driven by the need to belong to a social group. However, women tend to socialise within a smaller social circle, whereas men tend to socialise within a wider network. This would then lead women to form attachments with close others, and men to have more numerous associates who are less close.

Evidence that males have a wider social network appears from as early as the age of 3 to 5. Compared with girls, boys interact with a greater number of different children, but they spend less time with each one. At the age of 6, boys are more likely than girls to form groups. Boys are also more accepting of a third person into their pair group than girls are.

These differences affect how people represent themselves. When 7-17 year olds spontaneously describe themselves, girls are more likely to refer to specific individuals close to them (parents, best friends, etc.), whereas boys’ are more likely to refer to people in general.  Boys are also more likely to present themselves as being superior to others, whereas girls are more likely to downplay their own strengths to others and point out other people’s strengths. This may occur because, regardless of gender, people tend to be more modest with friends than with strangers. Thus, since girls socialise within a more intimate circle, they may be more likely to generalise more “friendly” behaviour than boys, who in turn may be more likely to generalise more aloof behaviour, as they are more used to interacting with more distant associates. Furthermore, Baumeister and Sommer suggest that girls tend to be more modest because doing so fosters intimate relations, as seen by the fact that girls are more likely to minimise their strengths with those who are worse off than them, in order to reduce feelings of discomfort in the other person. They also argue that boys tend toward self-promotion because it allows them to be accepted by a wider group of people, as shown by the fact that groups tend to pick leaders based on their confidence.

Another strategy that may facilitate intimacy is being sensitive to others’ emotions. Females have been shown to be more accurate in interpreting others’ emotional expressions. They are also more likely to express non-hostile emotions, whereas males are more likely to express anger, contempt, and disgust. Interestingly, this asymmetry is reflected in the differences in the upbringing of the two genders. Parents are more likely to discuss emotions (except for anger and disgust) with their daughters than their sons, and are more likely to display a wider range of emotions with the former. Furthermore, displays of anger are more accepted from males than females, whereas displays of sadness tend to be more positively reinforced in females than males. This suggests that females are socialised to express more conciliatory intentions (which corresponds with cultivating close social ties), whereas males are socialised to express more social dominance (which is consistent with the aim of self-promotion). In keeping with this, women tend apologise more than men do. However, this is partly explained by the fact that women have a lower threshold of perceiving offense (both those that they commit and receive). This lower threshold may be due to women’s greater sensitivity to other’s emotions, and a stronger focus on social harmony within relationships.

By contrast, men are more likely to physically aggress less intimate others and discriminate against outgroups. Across several cultures, men have been shown to be more ethnocentric, racist, militaristic, politically conservative, punitive, and generally antiegalitarian than women. However, such attitudes may be at least partly due to the position that men tend to hold in society.  Specifically, those who are in a position to enforce current group inequality or to strengthen ingroup power are more likely to have the desire to oppress other group, or to support social hierarchies; and men tend to be in this position more often than women are. Baumeister and Sommer argue that males use social dominance to gain popularity, as power attracts associates. They also suggest that a broader social sphere may encourage a concern with power because large groups tend to be hierarchical.
So how can understanding about these different socialisation strategies help us? To begin with, knowing why people display these behavioural differences can help us to better interpret these behaviours. For example, people who tend to be modest may interpret boasting as a sign of arrogance, when it may actually reflect the desire to be accepted through trying to impress others. On the other side of the coin, people who are more likely to apologise may be perceived as lacking in self-confidence by those who apologise less, as the latter do not expect people to apologise for relatively minor offenses. Yet those who apologise less may be perceived as rude and inconsiderate by the former.

Understanding when different social strategies are effective may also help us to use them more judiciously. For example, since boasting discourages intimacy, it is less suited to situations such as romantic contexts, close collaborations, and the disclosure of confidences. By contrast, self-confidence tends to be favoured in contexts where people are judged for their abilities, such as in the workplace. This may partly explain why women are less likely to be promoted than men, and also why they are less likely to put themselves forward for promotion.

Thus, understanding the functions and contexts of different social strategies allows us to move beyond the bounds of social sphere size. It allows us to consciously adapt strategies from the two spheres to fulfill the aims of both achieving close intimacy and having a wider social influence.