Grades at school: to use or not to use them? 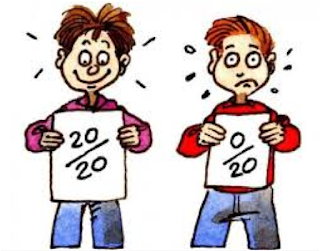 It’s exam period in schools and universities.
For several weeks, grades become the main concern of pupils, students, parents and professors. Most students are worried and impatient to find out whether they succeeded at their exams, but also to see whether their grades are better or worse than those of their peers. Parents and professors do the same: they constantly compare the grades of their children and students with those of others. But is this a good idea?

Some think it is. They consider grades as  “a" salary "for the student, a" stick "or" carrot "for the teacher and an accurate indicator for parents. Grades fit in our economic and social model where the most important thing is to be competitive" points Antoine Bazantay, journalist at the Belgian weekly, Le Soir. This viewpoint is very popular in our educational system and most professors and parents think we cannot evaluate students or follow their progress efficiently if we don’t use grades.

All Western countries, with few exceptions (for example, Finland), share the experience of receiving grades (OECD, 2011)- be they numbers, letters, or other labels that easily allow rank-ordering pupils and the products of their assessments. This can start right from the beginning of pupils’ education in primary school and all throughout their education.

Some view this practice of grades as problematic because the use of grades would prevent students from being actively involved in the process of learning. This is the case at the primary school of Buzet, Florette (Belgium), where pupils don’t have exams and don’t receive grades. According to parents, their children enjoy going at school and make faster progress; they learn through play and professors point out to their improvements rather than their failures. This school, with its own educational method, is a rare case in Belgium, and some professionals of education consider this model as unrealistic.

What would then be the solution?  To answer this question, it is important to distinguish between two types of assessments that the use of grades can produce.  On the one hand, grades allow one to compare a pupil’s current level of performance (or knowledge) to given criteria (i.e., ‘criterion-referenced assessments’). On the other hand, grades can be used to compare levels of performance (or knowledge) across pupils, thus allowing an implicit or explicit ranking from the first to the last (i.e., ‘norm-referenced assessment’). In both cases, the main advantage of grades is the visibility they provide: They summarize performance in a number—or a letter, or a judgment—and thus constitute an easily interpretable criterion of success (or failure).

Research in psychology and education suggest that the first type of assessment by grades is positive: When grades are used to compare performance with criteria and to communicate the evaluation back to the students and their parents only, this increases the motivation to learn because students feel their work is recognized and visible (Cameron & Pierce, 2002). When used as criterion-referenced assessments or, even better, when accompanied by written reports, grades were found to be good predictors of achievement tests (De Ketele, 1993).

Grades become problematic when they are used to make clear differences in merit across students, namely as norm-referenced assessment. In this type of situations, students often switch their interest from the material to learn to the comparison of performances with other students (Pulfrey, Buchs, & Butera, 2011). This has detrimental consequences for the learning process: When grades are used to rank students’ performance, they reduce the interest in the task at hand, impair intrinsic motivation, reduce creativity, reduce autonomy, hinder improvement from one test to the following and, more broadly, impair performance (Pulfrey, Darnon, & Butera, 2013).

One important situation in which grades have negative effects is the group context. Pupils and students are often asked to cooperate on common assignments and exercises while being individually evaluated with grades. In such situations, pupils and students face a dilemma: should they cooperate for the sake of their group or should they consider what is best for themselves and compete. Recent studies suggest that most students chose to compete in those group activities. As a consequence, they share less information, especially when they have information that nobody else has (Hayek, Toma, Oberlé, & Butera, 2015). Moreover, when students working in groups expect to be graded individually, they tend to stick on their points of view and look for evidence that supports, rather than questions, their viewpoint (Hayek, Toma, Oberlé, & Butera, 2014). This is especially problematic because pupils and students should be able to refute their positions and come up with solutions that articulate opposing perspectives, rather than confirming what they already know.

In conclusion, it is hard to promote cooperation at school and university as long as grades are by far the dominant assessment tool, employed to make rankings between students even in the most collaborative contexts.